Praying through the Celtic year - Lughnasadh 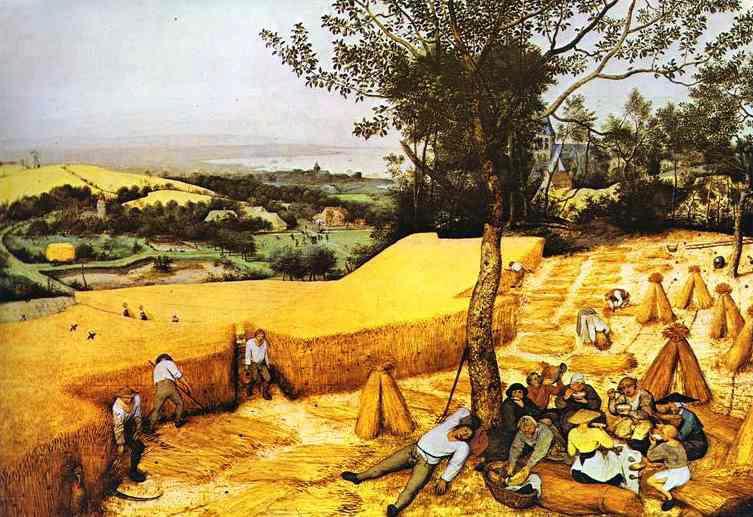 Lughnasadh marked the beginning of the harvest season, the ripening of first fruits, and was traditionally a time of community gatherings, market festivals, horse races and reunions with distant family and friends. On mainland Europe and in Ireland many people continue to celebrate the holiday with bonfires and dancing. The Christian church has established the ritual of blessing the fields on this day and in some English-speaking countries in the Northern Hemisphere, August 1st is Lammas Day (loaf-mass day), the festival of the first wheat harvest of the year. On this day it was customary to bring to church a loaf made from the new crop.

In many parts of England, tenants were bound to present freshly harvested wheat to their landlords on or before the first day of August. In the Anglo-Saxon Chronicle, where it is referred to regularly, it is called "the feast of first fruits". The blessing of new fruits was performed annually in both the Eastern and Western Churches on the first, or the sixth, of August.

Lammastide was also the traditional time of year for craft festivals. The medieval guilds would create elaborate displays of their wares, decorating their shops and themselves in bright colors and ribbons, marching in parades, and performing strange, ceremonial plays and dances for the entranced onlookers.
(source Wikipedia)

In Christian communities, the celebration of harvest has shifted to the end of the harvest gathering rather than the beginning, and therefore toward September.

The modern British tradition of celebrating Harvest Festival in churches began in 1843, when the Reverend Robert Hawker invited parishioners to a special thanksgiving service at his church at Morwenstow in Cornwall. Victorian hymns such as "We plough the fields and scatter", "Come ye thankful people, come" and "All things bright and beautiful" but also Dutch and German harvest hymns in translation helped popularise his idea of harvest festival and spread the annual custom of decorating churches with home-grown produce for the Harvest Festival service.

In looking to create a liturgy that reflects some of the character of both Lughnasadh and Lammas, with of course the celebration of harvest. I have tried to include creativity as well as fruitfulness as themes.

A Christian Liturgy for Lughnasadh

The earth is the Lord's
And all that is upon it

Springtime and Summer
Seedtime and harvest

For the promise of harvest
contained within a seed
we thank you.
For the oak tree
within an acorn
The bread
within a grain
The apple
within a pip
The mystery of nature
gift wrapped
for us to sow
we thank you.

‘As long as the earth endures, seedtime and harvest, cold and heat, summer and winter,
day and night will never cease.’
(Gen 8:22)

We see signs of summer's passing in golden leaves,
shortening days, misty mornings, autumn glow.
We sense its passing in rain that dampens,
winds that chill, Harvest's bounty placed on show.
Creator God, who brings forth
both green shoot and hoar frost,
sunrise and sunset,
we bring our thanks
for seeds that have grown,
harvests gathered,
storehouses filled,
mouths fed.
And, as your good earth rests
through winter's cold embrace,
we look forward to its re-awakening
when kissed by Spring's first touch.

(Here a song, chant or hymn might be sung)

‘Sow everywhere the good seed given to you. Sow in good ground, sow in sand, sow among the stones, sow on the oad, sow among the weeds. Perhaps some of these seeds will open up and grow and bring forth fruit, even if not at once'
Seraphim of Sarov (1759-1833) Russian monk

"Climb the mountains and get their good tidings. Nature's peace will flow into you as sunshine flows into trees. The winds will blow their own freshness into you, and the storms their energy, while cares will drop off like autumn leaves."
John Muir


"We marvel at the Creator, not only as the one who made heaven and earth, sun and ocean, elephants, camels, horses, oxen, leopards, bears and lions, but also as the one who made the small creatures: ants, gnats, flies, worms and the like - things whose shape we know better than their names. And as in all creation we revere his skill, so the one whose mind is given to Christ is earnest in small things as in great, knowing that an account must be given even for an idle word."
Jerome (331-420) Church Father

(A time of intercession might be appropriate at this point, either silent or aloud, praying for areas of the world where harvests are uncertain because of drought or warfare, but also praying for fruitfulness wherever it might be shown - lives dedicated to serving others, for artists and craft workers who take the natural things of this world and make something beautiful from them)

For creativity in its many forms
we give you thanks
For the skill of weaver
potter, artist, sculptor
needle worker
all who take that which you have given
and make with it something of beauty

For fruitfulness in its many forms
we give you thanks
For selfless love
grace, wisdom, knowledge
sacrifice
all who take that which you have given
and make with it something of beauty

For summer's passing
and harvest home
A. WE THANK YOU

For seed that has fallen
the promise of spring
A. WE THANK YOU

We bless you,
God of Seed and Harvest
And we bless each other
That the beauty of this world
And the love that created it
Might be expressed though our lives
And be a blessing to others
Now and always
A. AMEN

Back to Praying through the Celtic Year