This is a new series of Bible studies, to encourage discussion and interaction with Scripture and examine what it might have to say to us now.

It is an ongoing project, and studies will be added as they are written.

The Bible studies have a common format, of a prayer,  opening discussion, a chapter or so of the book to read, a short commentary, ten questions to stimulate discussion in the group, a 'takeaway' suggestion to ponder and something to pray about in the week. There are also leader's notes for whichever questions need them, to help get the discussion going.

They are suitable for groups which have  a basic understanding of Scripture, those who want to engage a little deper, and also those who just want to see how Scripture speaks to us today.

There are generally 6 studies per book, which makes it easier to fit into the Church year, the format is pdf to download, and printing individual studies off for your group is straightforward, as they fill 4 sides of A4. 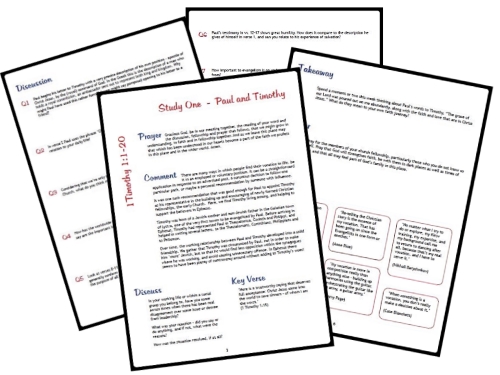 The two letters we have addressed to Timothy were written to an individual rather than a Church.  They are pastoral in content, concerned with matters of belief, heresy, behaviour, responsibility, relationships, worship and prayer.

Paul speaks about real situations, many of which we can relate to today. Here, he is talking to his good friend, Timothy, who has been sent to the believers in Ephesus as a kind of troubleshooter, to get the fledgling Church onto an even keel and fit for purpose for the first century!

In his second letter to Timothy, Paul is in prison in Rome, facing an uncertain future, but rather than dwell too long on his own problems, he continues to offer both encouragement and instruction to Timothy in how the Church in Ephesus might be best organised, such that it will both grow and flourish.

There's a real sense of urgency in Paul's words, with instruction to preach the Gospel in and out of season, as time is always short for hearing and responding to God's Word.

Titus has been asigned to the Church in Crete, whose population are notorious for being  troublesome, but he seems very self-assured and up to the task. Here it is all about finishing the task which Paul himself had started.

The two letters we have from Paul to the believers in Thessalonica were written within a few months of each other, the second to counter a potential problem and nip it in the bud. There's a real difference in the tone within the two, a reflection of Paul's frustration that all s maybe not running as smoothly as it might.

Thessalonica was an important area strategically for Paul, situated at the top of the Aegean Sea, a key port and financial centre situated on the main road from Rome to Asia and with a strong Jewish community among which Paul hoped he could work.

We have two letters to the believers in Northern Asia Minor which carry the name of Peter as author. The first was universally accepted by the early Church, but the second took some time to find its way into the accepted canon of books in our New Testament. However, both are well worth examining because they are full of wisdom and advice.

Peter's emphasis is on holiness and showing the fruits of the Spirit day by day, a lifestyle which will counter  accusations coming from those critical of the Church, and keep believers in good stead for Christ's Second Coming. He also tackles the thorny problem of false teaching, which was obviously a cause for concern.